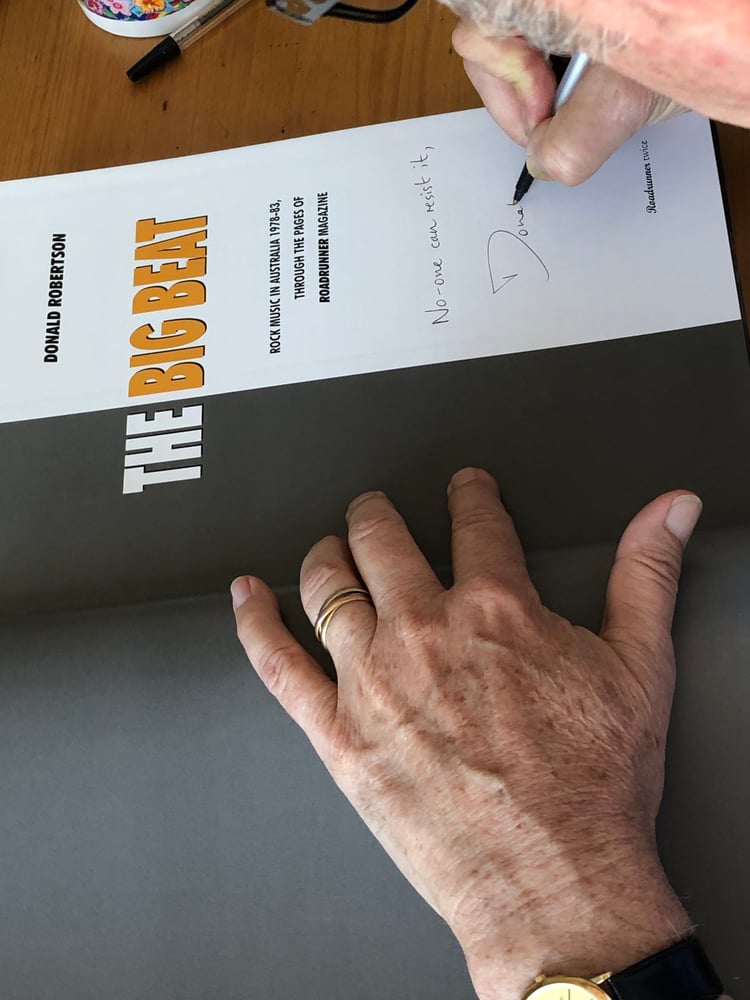 THE BIG BEAT
Rock music in Australia 1978-83, through the pages of Roadrunner magazine

Climb on board as an Adelaide punk fanzine blossoms into a well-loved national music magazine that chronicles the glory days of Australian post-punk and 'pub rock' music.

A year-by-year history of the magazine by the editor, Donald Robertson, introduces a selection of over four hundred fully indexed pages from the original issues.

Part of the proceeds from the book will go to the music industry charity Support Act.
* * *
Roadrunner was a great Australian music magazine with well informed and balanced coverage and criticism of the bands and recordings it dealt with. It was a serious but entertaining music publication with a stable of impressive local writers. It is a shame that there is no equivalent contemporary magazine or for that matter a contemporary TV show like Countdown to promote Australian music to a wider audience.
—Reg Mombassa (Mental as Anything, Dog Trumpet)

The Roadrunner was a champion of Australian music. What I remember is good music journalism…I enjoyed the read…even the reviews which could be brutal…it was more about lifting standards than anything personal. That's what I liked about that magazine.
—Joe Camilleri (Jo Jo Zep and the Falcons, The Black Sorrows)

When Roadrunner first hit the streets of Adelaide in early 1978, it gave voice to the nascent new wave and punk bands that had been struggling for recognition and acceptance from a tired and largely moribund pub rock establishment. Here was a magazine written by fans for fans whose D.I.Y. ethos matched that of the bands it supported. This collection should be an invaluable resource for those who weren't there at the beginning and a nostalgic reminder for those of us who were...
—John Dowler (Young Modern, John Dowler's Vanity Project)

Among its peers, Roadrunner was marked by a deeper understanding of the culture that it served. It looked long and hard into our national soul, without fear or favour. Ever skating on financial thin ice Roadrunner was, at once, literate, entrepreneurial and courageous.
—John Schumann (Redgum)

Blasting out of Adelaide in 1978 and suffering a premature death in Sydney in 1983, Roadrunner music magazine provided us cool groovers with all the music news we needed and prophesied greatness, inspiring our onward march. Way before radios stations knew of a great band or song, Roadrunner did.
—Peter Oxley (Sunnyboys)

What a trip it was. Roadrunner was there to capture every moment. Then, diverse interesting bands influenced by overseas cultural movements and politics at home, had access to the stages and Roadrunner was there to capture them. Wonderful writers who were part of a scene they understood, loved and encouraged documented every musical moment in reviews, news and gig guides but most of all great band stories that said it all. What a trip it was.
—Lindy Morrison (The Go-Betweens)